Before you or someone you know blindly reaches for an energy drink, please educate yourself and remember what you learned at the Complete Wellness Report. The information could save a life. 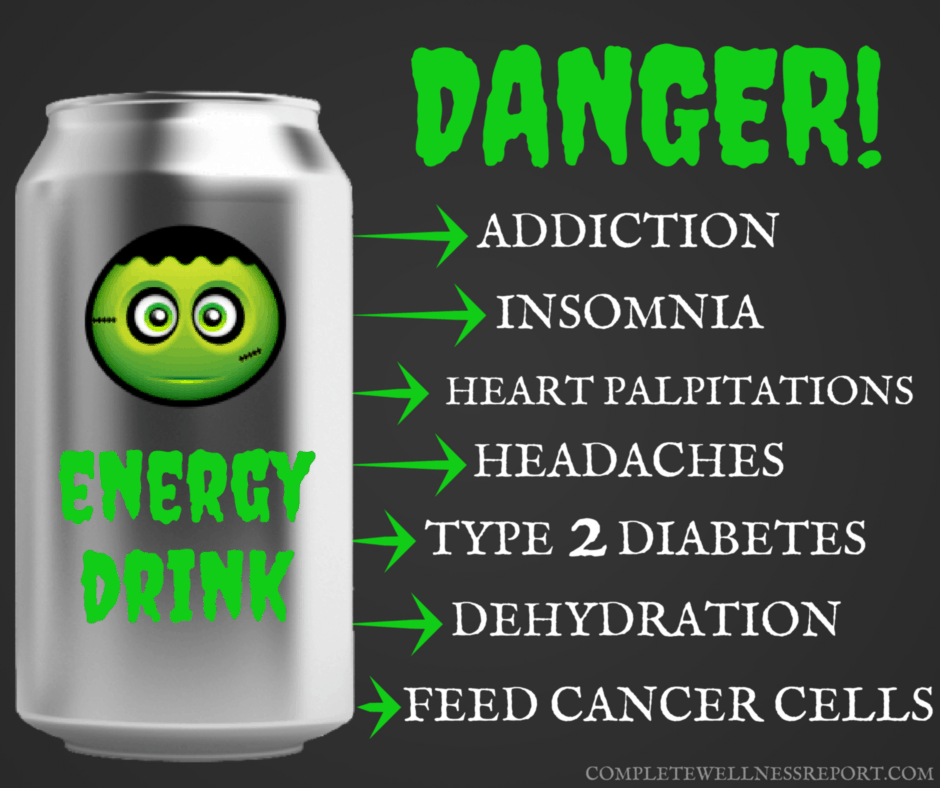 Lawsuits have been filed against the makers of Monster Energy drinks, claiming consumers were not adequately warned about the health risks associated with these widely available beverages. Three lawsuits have recently been settled for undisclosed monetary amounts.

One high-profile suit involved the case of Anais Fournier, a 14-year-old girl who drank two Monster Energy drinks within a 24-hour period. Fournier was found dead as a result of cardiac arrest, triggered by caffeine toxicity alleged the plaintiffs. In addition to Fournier, the lawsuits of Alex Morris and Shane Felts also went to court, and these cases were also settled for undisclosed amounts.

WARNING: Do Not Confuse Energy Drinks For Health Drinks, They Are NOT The Same Thing

Surprisingly, energy drinks are often falsely marketed as nutritional supplements, essentially as something good for you, although they may not have any nutritional value at all. Don’t be fooled, get educated! The sake of your health is riding on it.

An increasing number of studies are discovering products like Monster, Red Bull, and 5-Hour Energy contains toxic amounts of acidity, sugar, and caffeine that offer a variety of health dangers to the body. The extreme contents in these beverages can cause rapid heartbeat, high blood pressure, dehydration, vomiting, cardiac arrhythmia, seizures, headaches, insomnia, and even death. 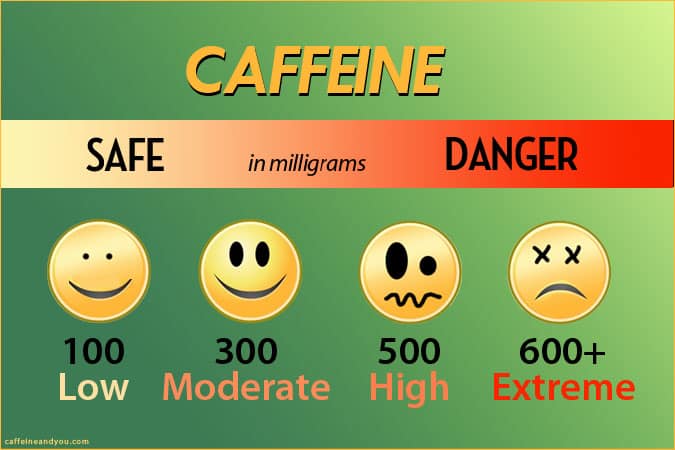 Caffeine Overdose: How Much Caffeine Is Too Much?

Overdosing on caffeine is a real thing, and it’s a concern for ALL ages. A recent study published in the Canadian Journal of Cardiology suggested energy drinks can increase the risk of heart problems, even in youth who appear healthy or have no apparent underlying heart issues.

Monster Energy beverages contain around 240 milligrams of caffeine per serving, and when you add on top of that the other caffeinated sodas kids drink as part of the Standard American Diet (SAD), the daily cumulative effects can be life-threatening. Outside of what is known about the caffeine content, some experts say the caffeine levels are even higher because the drinks contain unlisted stimulants often called “masked caffeine” ingredients that are included in the “proprietary energy blend.”

So What Is Known About Propriety Energy Blend and Are The Other Ingredients Even Good For You?

The amount of caffeine in a Monster drink aside, there are other ingredients present with obvious health hazards.

First, each can of Monster drink contains between five and six teaspoons of simple processed sugars. These sugars spike your blood sugar levels, and the feeling of energy rises quickly, but your sugar and energy will also crash just as quickly. For a person with diabetes or anyone sensitive to sugar, this can be devastating.

To a lesser extent, there are trace amounts of B Vitamins, such as B2, B3, B6 and B12, which may help supplement the lack of B Vitamins in one’s diet. However, we would argue that if you are eating a balanced diet of nutrient-rich foods, then why should you need to drink Monster’s to supplement these vitamins in the first place?

There is a tremendous amount of Taurine in each can of Monster Energy drink. This amino acid is found naturally in the human body and helps to regulate salt and water in the blood. Sounds healthy, right? However, this outside source of taurine is derived from bull sperm (Ew…seriously so gross), and worse yet, little is known about the possible side effects of consuming too much of this “supposed” good thing.

Guaranine also found, is a plant-based product that has effects that are very similar to caffeine and include known nasty side-effects like anxiety, heart palpitations and insomnia. What? Who gets up in the morning needing an energy boost that yearns for these side-effects?

Other chemicals in a can of Monster Energy are carnitine, inositol, maltodextrin, and glucuronolactone.

Conclusion: It is apparent that some of the Monster Energy drink ingredients can temporarily boost your need for energy, but at what cost? These synthetic chemicals may be doing more harm than good to your body. 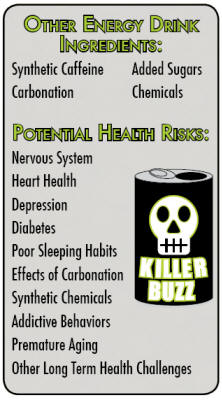 The crazy reality is harmful energy drinks are not regulated, but sodas are.The FDA does not require energy drink companies, like Monster, to list the exact amount of caffeine on ingredient labels because the products are categorized as dietary food supplements instead of food.  Because of this regulatory oversight, most energy drinks would likely exceed the FDA-mandated limit of 71 milligrams of caffeine for a 12-ounce soda.

In addition to caffeine, too much refined sugar is also bad for one’s health. The American Heart Association tells consumers to have no more than six teaspoons or 24 grams for women or nine teaspoons or 36 grams for men of refined sugars each day. RELATED: 10 “Healthy” Foods That Actually Trigger Sugar Cravings. One can of Monster Energy has 14 teaspoons of sugar alone, nearly double the daily recommended amount of sugar for both female and males.

White sugar is essentially an inflammatory, and studies now show a connection between inflammation in the body and the disease development process. Due to the high sugar content, many people are experiencing the dreadful health consequences like obesity, diabetes, heart disease, cancer, gum disease, and tooth decay. 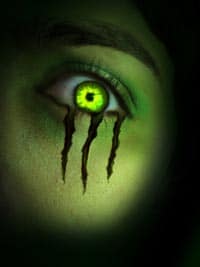 Last year you may remember the women who claimed that the “M” logo could resemble three instances of the letter Vav, the Hebrew numeral for six, interpreting the logo to mean “666.” Later, she references Monster’s slogan on a product banner reading “Unleash the Beast,” interpreting these two examples as Monster Energy intending to reference “the beast” in the Book of Revelations. The woman also claimed that a cross in the letter “O” of Monster resembles a crucifix and says that when the can is held is upside-down when drinking, the symbol in inverted. She believes that this inverted crucifix is meant to symbolize Satanism.

Whatever the purpose of their marketing, we believe all artificial energy drinks are evil and damaging to our bodies.

Reader – Have you had an unnatural experience when drinking a Monster Energy drink? Share your experience below.

Next Read: Energy Drinks: Crash Into Reality Before You’re Too Late

(H/T) Is Monster Bad for You? 3 Things You Need to Know About Energy Drinks

(H/T) Are Monster Energy Drinks Bad For You?