Disgust Your Way To A Healthier You!


Although people know the lack of nutritional value in fast food, sometimes we have a ‘french fry’ craving. Busy lifestyles, surroundings, and enticing marketing often lead to fast-food consumption. What if we could rewire our mindset to reduce these natural cravings for high-calorie foods?  Continue reading and see how a “disgust diet” may be a way for people to resist unhealthy options that surround us daily.

Kristina Legget and her team of researchers at the University of Colorado Denver Anschutz Medical Campus looked critically at what makes certain foods so desirable (especially those sin foods drenched in saturated oil) in order to better understand the possibility of rewiring the brain to make desirable unhealthy foods unappealing.

Psychologists call this new approach subliminal priming. It works like a Jedi mind trick. The new concept is to subconsciously implant an idea into someone’s mind that can influence their thought pattern, thus controlling behaviors like food choices.

The Study: Power of Imager 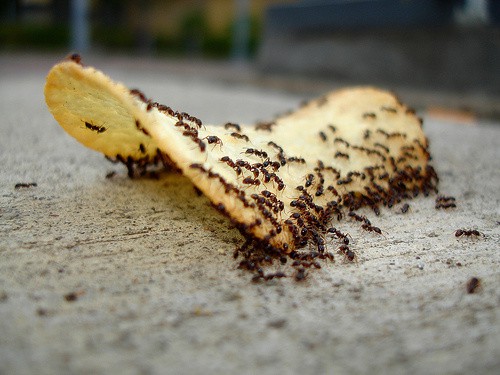 The study involved 42 volunteers who were shown a picture of a high-calorie food and was asked, “would you like to eat this food right now?” The overwhelming majority responded, YES! The practice was again repeated with a slight twist. This time, Legget and her team flashed volunteers a disgusting image, like a picture of ants crawling over pizza, for a fraction of a second before proceeding to show the image of the high-calorie food.

The disgusting image was shown so fast that it was almost impossible to consciously recognize the picture. However, it was slow enough to signal a part of the brain called amygdala, which acts as the memory for emotional systems. The amygdala was quick to register the disgusting image and activated the appropriate emotions associated with that type of imagery. When the volunteers were shown a picture of a high-calorie food after showing a disgusting picture, they were not as interested. Why? Because their brain was still churning with that phantom repulsion.

Interestingly enough, this mindset was not just temporary. The same exercise was conducted again after three to five days. The disgusting image was not flashed this time, but still the volunteers displayed the same undesirable attitude towards the high-calorie. According to Legget, the volunteer’s brains actually linked ‘disgust’ to that type of food, and that association was not limited to that moment. This is indeed a very interesting finding that shows the ability to change the perception of food by using a subliminal priming technique.

Reader – Will you try this at home? Share your results with us!

Thank you for reading the Complete Wellness Report. We look forward to hearing your thoughts on our FB page.

(H/T) Disgust Diet: Can You Train Your Brain To Recoil At Hight-Calorie Foods?