Pulmonary fibrosis affects 48,000 new people in the United States each year, according to the Coalition for Pulmonary Fibrosis. The disease gradually progresses and is fatal. Although some pulmonary fibrosis is caused by environmental pollutants or lung disease, the precise cause is never found for the majority of patients. Thus, characterizing the molecular biology mechanisms associated with the disease could have a profound impact on patients and treatment options. A new study by researchers at the University of Tsukuba in Japan points to the role of a molecule called Nrf2 as a protective factor against idiopathic pulmonary fibrosis.

Pulmonary fibrosis occurs when lung tissue becomes scarred. For unknown reasons, molecules such as collagen, tenascin, and elastin build up in the tissue as well as fibroblasts. This build-up of extracellular matrix molecules causes tissue to become thick and inflexible. As a result, patients find it challenging to breathe normally, and their body tissues do not get enough oxygen.

Accumulating evidence points to a role for oxidative stress in the development of pulmonary fibrosis. All cells require oxygen to survive. Oxygen is consumed as a normal part of cellular metabolism, but this metabolic process can lead to the formation of harmful reactive oxygen species (ROS). ROS refer to chemically unstable molecules that have a tendency to strip electrons from other molecules they contact. This causes a chain reaction of molecular instability, ultimately damaging cells.

The cumulative effect of ROS on cells is called oxidative stress. Previous studies have shown that patients with pulmonary fibrosis have high production of ROS in their airway cells. Similarly, in laboratory animals, scientists can overproduce ROS using a drug called bleomycin. Bleomycin exposure leads to oxidative lung injury that includes the type of scarring observed in pulmonary fibrosis.

Given the role of oxidative stress in pulmonary fibrosis, finding a way to turn on the body’s antioxidant response may be an effective treatment for the disease. 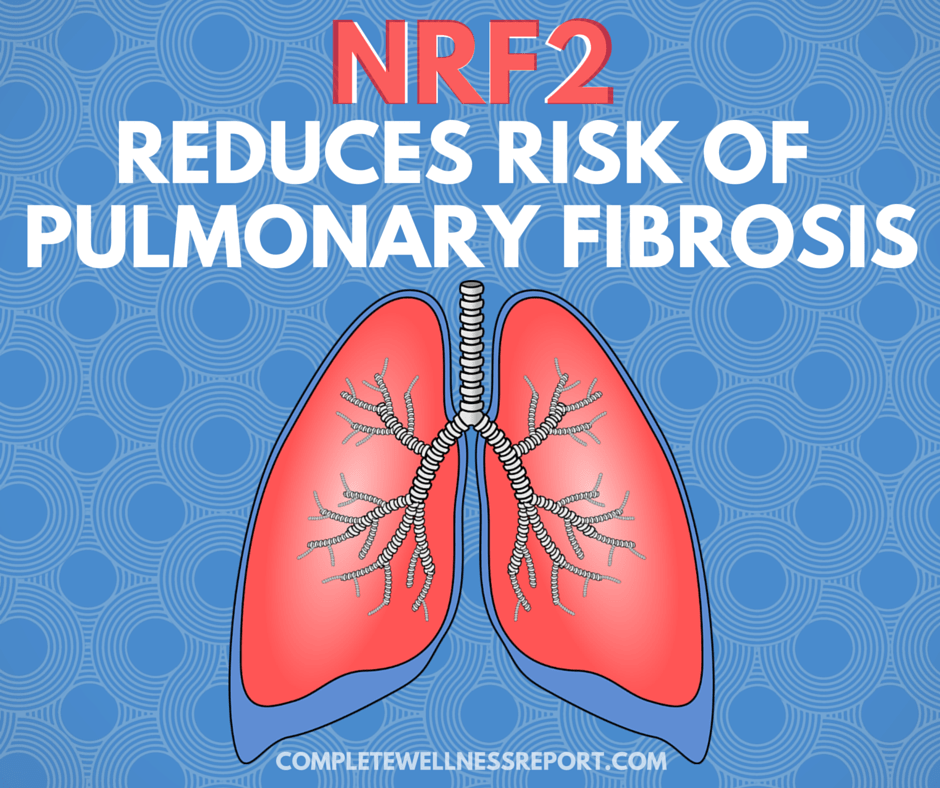 Role of Nrf2 in Decreasing Risk of Pulmonary Fibrosis

Nrf2 is a transcriptional activator that turns on the expression of antioxidant genes. Thus, it is an important player in the body’s defense against ROS. Previous research has demonstrated that Nrf2 protects against the development of pulmonary fibrosis in animal models.

The researchers from the University of Tsukuba wanted to identify the molecular targets of Nrf2 that impact the development of pulmonary fibrosis. In particular, they targeted the inflammatory phenotypes Th1 or Th2. Th1 and Th2 are two different ways in which the immune system responds to tissue injury. A Th1 response activates a core set of cytokines, or inflammatory modulators, that aid in cellular immunity against disease. A Th2 response turns on a different set of cytokines that increase the levels of mast cells and eosinophils, two immune system cells. Animals with an intracellular cytokine level that resembles a Th2 response may be more susceptible to pulmonary fibrosis than those with a Th2 response.

Association between Nrf2 and Th1/Th2 Response

Next, the researchers investigated inflammatory protein and antioxidant enzyme levels in mice with bleomycin-induced pulmonary fibrosis. Nrf2-deficient mice with bleomycin exposure had higher levels of inflammatory proteins and lower levels of antioxidant enzymes than wild-type mice. Furthermore, they characterized the immune system response of mice as Th1-like or Th2-like. They found that the Nrf2-deficient mice showed higher levels of Th2 cytokines, suggesting that this immune system response makes them more susceptible to pulmonary fibrosis. These cytokines are thought to arise from lung macrophage cells. Finally, the scientists demonstrated that GATA3, the master regulator of the Th2 immune response, was elevated in lung lymphocyte cells after bleomycin. The regulator of the Th1 immune response was downregulated.

Taken together, these findings indicate that in the absence of a Nrf2-mediated antioxidant response, animals are highly susceptible to pulmonary fibrosis. This occurs because they have a bias toward a Th2 immune response, which is characterized by increased levels of inflammatory cytokines that cannot inhibit fibrosis-causing oxidative damage.

Although the association between Nrf2 and Th1/Th2 immune responding has not been established in humans with pulmonary fibrosis, this study provides suggestive evidence that mounting a strong antioxidant response may decrease the likelihood of developing the disease. Eating antioxidant-rich foods may combat ROS and reduce oxidative stress. In particular, eating foods such as coffee or cruciferous vegetables (e.g., broccoli, Brussels sprouts) increases the activity of Nrf2 and may trigger an antioxidant cascade that prevents the cellular damage associated with pulmonary fibrosis.

Reader – What did you learn from this new knowledge? Do you want to activate your Nrf2 pathway?