Ever since the World Health Organization announced back in March of this year that the most widely produce herbicide, glyphosate, was “probably carcinogenic to humans,” health-conscious consumers have become aware of how this herbicide is contaminating our food.

Many people already know glyphosate is in Monsanto’s weedkiller, Roundup, which is heavily used in agriculture on genetically modified crops like corn and soybeans. According to the Environmental Protection Agency (EPA), an estimated one billion pounds a year is sprayed on our food crops, resulting in the average American eating several hundred pounds of glyphosate-contaminated food every year. 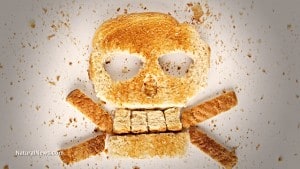 It’s been used on GMO crops, but did you know that commercial wheat products are saturated with glyphosate in order to speed up harvesting?

This same toxic weed killer is being used by commercial farmers to expedite the death of wheat crops, shortening the lag time between cutting the crop and sending it to market.

Armed with this knowledge, you’ll likely find yourself motivated to eliminate this harmful toxin from your diet and feel compelled to share this research with everyone you know.

If you were looking for a reason to buy organic bread, look no further.

CHECK:  Do You Have A Poisonous Pantry?

• Commercial loaves of bread sold at the grocery store

• Pasta products (spaghetti, noodles, etc., that are made with wheat)

ACTION:  How to Reduce Your Family’s Exposure to Harmful Toxins

So many of the chemicals we are exposed to daily are contaminants in food and/or the packaging. Of course, non-organic processed foods have the greatest amounts of toxins like pesticides. In order to reduce your family’s exposure to glyphosate and other harmful chemicals, consider these tips provided by Dr. Anthony Samsel, an expert research scientists focused on agriculture and pesticides like glyphosate.

Must Watch:  Dr. Mercola Interviews Dr. Samsel on the Dangers of Glyphosate

Reader – How do you feel about glyphosate?  Will this change your buying habits?  How does this motivate you?

(H/T) The hidden weed killer in your BREAD: Commercial wheat doused with cancer-causing glyphosate herbicide right before harvest… and you’re eating it!