Jim Carrey speaks out against Gov. Jerry Brown who is requiring all public school children in California to be vaccinated next year. Carrey is fighting to stop Brown with a petition to repeal the law and it has nearly reached its goal of 100,000 signatures. 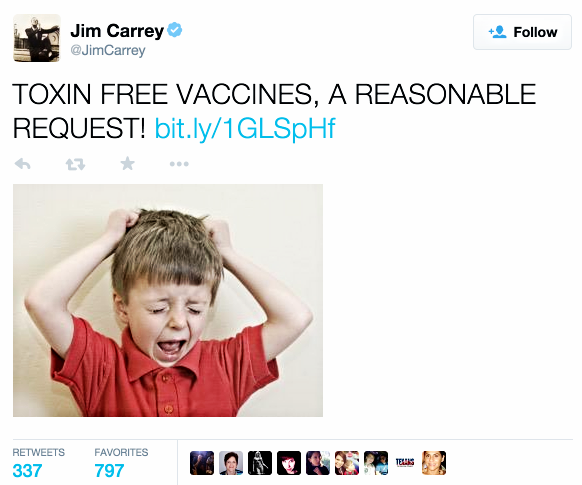 “California Gov says yes to poisoning more children with mercury and aluminum in mandatory [sic] vaccines. This corporate fascist must be stopped.”

A number of celebrities have also voiced their opposition with this new law. When Carrey was in a relationship with Jenny McCarthy, she said her son developed autism after receiving a vaccination.

Carrey asks you to visit TraceAmounts.com to see if you agree with his reasoning. This documentary investigates the link between mercury-based preservative thimerosal and the growing autism epidemic.

Watch the Trace Amounts trailer below and learn how thimerosal damages the body.

Reader — Do you agree with Jim Carrey? How do your kids feel about vaccinations?