Observing Breast Cancer Awareness Month, the evolving and controversy treatment options for breast cancer motivated Time Magazine to enlighten their readers on ductal carcinoma in situ (DCIS) this month. DCIS is the earliest form of breast cancer and is the presence of abnormal cells inside a milk duct in the breast.

Nearly every year since 2000 and unfortunately, this year again, more than 40,000 women in the U.S. are projected to die of breast cancer.

With these growing statistics and new studies being released, concerns on the way we test and address cancer is strengthening. Experts have recently shown minimal confidence in mammograms while also worried with overtreating breast cancer since many cancers are “indolent” meaning they are slow-growing tumors that may never cause symptoms or result in a woman’s death.

Yes, mammograms can find cancer, but do you want to wait until the machine finds it? These machines also falsely diagnose sometimes, thus contributing to the concern of over-diagnosis and unnecessary treatments.

Researchers from Harvard and Dartmouth found after analyzing cancer registry data from 16 million women in 547 counties across the United States, they found “no evident correlation between the extent of screening and 10-year breast cancer mortality.” The researchers concluded that mammograms primarily find small, typically harmless, or non-lethal tumors, leading to widespread over-diagnosis.

Not saying women should not have mammograms, however the October article expresses how mammograms are an imperfect technology that gives radiation to patients; finds slow-growing, mostly harmless, cancer; and can create an over diagnosis resulting in more unnecessary chemotherapy, radiation, and surgery practices.

Thermography: An Alternative To Mammograms

All testing for detecting cancer early is good for preventive measures, but a mammogram may be too controversial and minimally reliable.

Dr. Charles Major suggests thermography tests, which is the measuring of heat, blood supply, and vascular supply etc. and he shared that his mom, wife, and patients do this test as well. If looking to take a thermography test, make sure you go to a facility that is very experienced and successful, as some places have difficulty reading the test results, which is why this practice is also considered controversial. 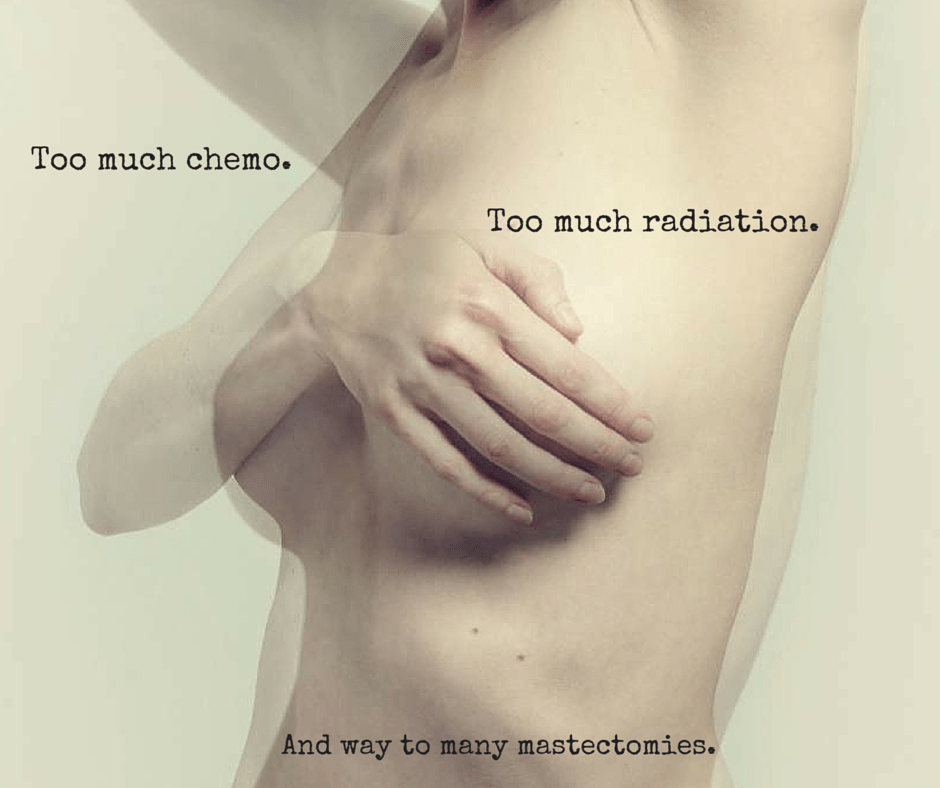 Doctors are learning that the “one-size-fits-all” approach is not working, and with the evidence being released, many U.S. women are overtreated for breast cancer. In-depth biology findings and better advances in genomic testing are showing that every woman is different. While some women require urgent and aggressive treatment, there are many who can invest their time into a more sparing, preventative approach.

Even though a test detects cancer, the treatment process may be different, depending on the level of breast cancer. Aggressive treatments with devastating consequences may not be the best way to treat breast cancers that are in the early stage. This major shift in the way doctors address cancer makes the decision process even harder.

“As a surgeon, to say we shouldn’t be operating as much as we are is a very big deal,” says Dr. Mehra Golshan, a surgical oncologist at the Dana-Farber/Brigham and Women’s Cancer Center. “And that’s what I’m saying.”

Some of the medical field is coming forward to say this “collateral damage” including multiple follow-up surgeries after a mastectomy and the subsequent infections; the radiation that can actually cause cancer; along with chemotherapy that can be unnecessary and have life-changing effects, is getting harder and harder to justify.

“What if I decided to just do nothing?”

Laura Colletti, age 60, was diagnosed with ductal carcinoma in situ (DCIS), also known as Stage 0 breast cancer, in April 2014. Rather than immediately having surgery, Colletti opted for an alternative called active surveillance.

“My daughter’s initial reaction was, ‘Mom, if it was me, I’d take it out,’” Colletti recalls.

Watch and see how and what she decides:

Reader – If you were diagnosed with DCIS, what would you decide?

Next Read: Cancer Controversy: Doctors ‘Treat’ Symptoms, Not the CAUSE

(H/T) Choosing to Wait: A New Approach to Breast Cancer at Its Earliest Stages