Black Pepper Could be the Perfect Way to Fight Your Last 10 pounds…
New research finds the same sneezing ingredient found in black pepper can also help you get slim!

A recent study published in 2012 by the Journal of Agriculture and Food Chemistry showed that black pepper contains a pungent substance called piperine, which can help prevent the formation of fat cells in your body. The research concluded that black pepper may offer a natural alternative for the treatment of fat-related disorders like obesity. According to the researchers, black pepper has a chain reaction that prevents the formation of fat and helps regulate other areas, such as improving mood, serving as an antidepressant.

The medicinal benefits of black pepper have been known for centuries in traditional Eastern medicines to treat diseases such as cholera, diarrhea, and other gastrointestinal disorders. Over time, black pepper has become known as the “king of spices” around the world.

In 2010, a study was published in Bioscience, Biotechnology and Biochemistry where scientists made mice obese through a high fat and high sucrose diet to investigate the effects of black pepper on body fat accumulation. Once obese, scientists introduced black pepper to their diet without making any other alteration in the diet. The result: mice’s visceral fat weights decreased significantly.


The study published by the Journal of Agriculture and Food Chemistry in 2012 found that black pepper has an antiadipogenic effect. This simply means it prevents the production of fat cells. This could lead to scientists using this knowledge for obesity treatment, however, the concentration of piperine used in the study was 100 times higher than the amount you could take in from your diet. 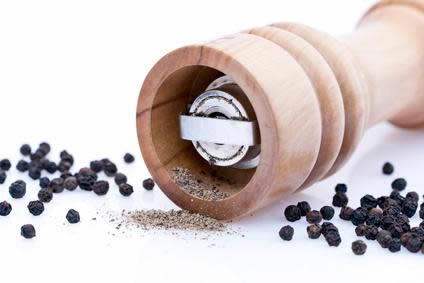 In 2013, a study was published in Cell Biochemistry and Biophysics about piperine which addressed the possibility that black pepper may help regulate metabolism and also help reduce inflammation and oxidative stress. The 166 weeks study concluded that piperine could play a role in reducing symptoms of metabolic syndrome in humans. The study also suggested that black pepper could increase your metabolism and help you burn more calories, therefore cut down your belly fat. However, this study is not conclusive and is in its preliminary stage. More research is needed in this direction to come up with something conclusive.

In addition to helping burn fat, black pepper is known for many other health benefits.

Reader – Do you already eat fresh cracked pepper?  Will you start now?