Further supporting the connection between our heart and brain, the American Heart Association has published a statement advising all doctors and the public that teens with mood disorders like depression and bipolar, appear to have an increased risk of heart disease.

Even though all the previous evidence shows how heart disease and depression are interlinked in older adults, there is little to no evidence on how depression may affect cardiovascular markers in young people.

With that said, current studies are showing how the gradual development of heart disease starts at an early age, so taking preventative measures early on in kids and teens might soon be a requirement. At this point, the American Heart Association emphasizes the importance and recommends screenings at an early age.

Searching for the Connection

Researchers around the U.S. and Canada looked at existing studies on mood disorders in people under the age of 30. They focused on participants who had diagnoses of depression or bipolar disorder, who also had coinciding data of cardiovascular markers, such as blood pressure and cholesterol.

Their findings were certainly significant.

The researchers found there is a strong connection between having depression or bipolar disorder and increased odds of high blood pressure, high cholesterol, obesity (especially belly fat), type 2 diabetes, and hardening of the arteries. Most participants were not prescribed antidepressants, but for those who were, the medications did not explain the relationship between depression and heart health. Neither did lifestyle factors like smoking or inactivity. 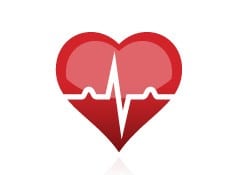 You may be asking yourself, what is the contributing factor that would explain the connection between mood disorders and heart health?

Among the possible candidates, inflammation and oxidative stress are most apparent.

Recently, the idea that depression is linked to inflammation in the brain has become more prevalent in the research community. Therefore, the notion that it could be present in young people is very likely.

Benjamin Goldstein says outside stressors could also play a role, to where if a child goes through a stressful situation or lives with a chronic stressor, the inflammation caused by that stress may in some degree, raise the risk for both depression and heart disease.

“External life stressors are part but not all of the story. We know that among people with depression, those with early life adversity, such as abuse or neglect, are especially likely to demonstrate high levels of inflammation. When it comes to the mood-heart link, I would argue that the most fascinating perspective to take is that it’s not really a question of chicken or egg, but rather both are chicken and both are egg. That is, mood disorders and heart disease are different outcomes of the same disease processes.”

Regardless of the cause, it’s reasonably clear at this point that there is a strong link between heart and brain health. What’s good for the heart is good for the brain – exercise, healthy foods, and being socially active. And the opposite is true too, since poor diet, lack of exercise, isolation, and of course, stress, are notoriously bad for both organs. For children and teens, whose brains are still developing, it makes sense that they’d be particularly susceptible to the effects of stress and inflammation.

“I can’t overstate the need for new treatment approaches, objective biological markers, and stigma reduction in my field,” says Goldstein.

Reader – What are your thoughts of how inflammation and stress could well be linked to heart and brain diseases?